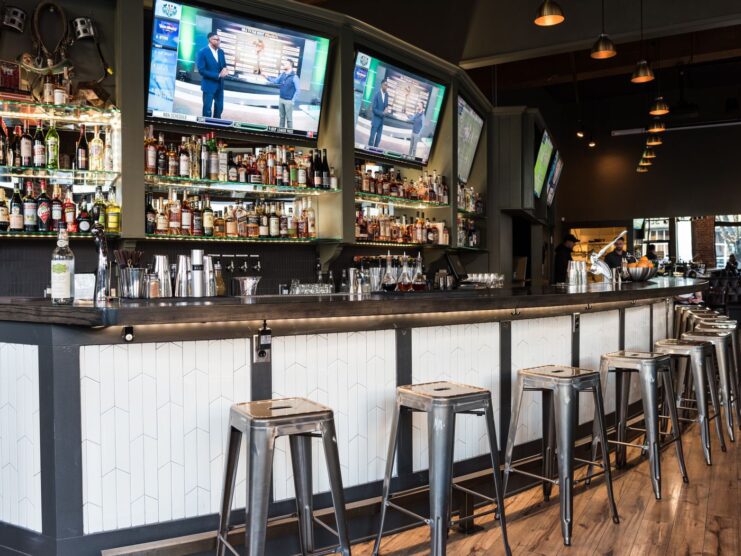 After a slightly bumpy beginning, this lively neighborhood space has found its footing—and a loyal following.

It seemed like a recipe for a hands-down success: combine a highly visible corner location in a burgeoning business and residential neighborhood with the expertise and energy of a sought-after bar expert opening his fourth establishment, a Michelin-star chef, a hugely successful restaurant development group, and a national sports celebrity. Throw in a can’t-miss concept: American sports bar meets neighborhood tavern. And you’ve got an instant winner, right?

“When we started out, we let ourselves get a little undisciplined,” says Ryan Magarian, the man behind some of the city’s most successful bar programs, including neighboring Oven & Shaker, which he runs with chef Cathy Whims. His newest venture, the comfortably masculine Pearl Tavern (231 NW 11th Ave, 503-954-3796), which he opened almost a year ago with former University of Oregon and NFL footballer Joey Harrington, took a few months to hit its stride.

“We were trying to do too many things,” he says. “We were kind of looking at doing steak, we were sports, we were a restaurant, and honestly—it just didn’t connect with people at first.”

Steadily, however, Magarian and his teammates have put together a winning venture, with star chef Thomas Boyce helming the kitchen. Pearl Tavern maximizes what Magarian refers to as the neighborhood’s desire “to find comfort and community in one space.” Indeed, you’ll find an unexpectedly high level of service, food, and beverages that’s quite uncommon among sports-concept restaurants.

Magarian claims, in his humble opinion, that the tavern turns out the best burger in town. Other top dishes include a healthier version of classic nachos, featuring pulled pork, tomatillo salsa, and cotija cheese, and an unabashedly decadent mac and cheese. Chef Boyce, known for his commitment to local farms, ranchers, and fishing families, plans to feature Dungeness crab cakes when the season opens, and his fish-and-chips and shrimp with hazelnut romesco are already fan favorites.

Magarian also designed his cocktail menu with fresh ingredients in mind. Consider the Whiskey Ginger From Scratch, with freshly extracted ginger juice (“people go bananas for it,” he says) and Thumper’s Revenge, which he describes as “somewhere between a Bloody Mary and a mojito with carrot juice as a primary foundation—so fresh, but savory too.”

He also lauds the whiskey selection, curated by Tommy Klus of Multnomah Whiskey Library. “I didn’t want the biggest whiskey selection, I wanted a really exceptional one,” says Magarian, who asked Klus to come up with “60 to 80 whiskeys that you would serve to your friends.”

Whiskeys are available in half pours, so you can sample a variety you’re perhaps not familiar with. A tip: ask for the hidden menu, a list of 80 or so vintage cocktails that Magarian says many imbibers may never have even heard of.

And while Magarian and Harrington are both Ducks, the Pearl Tavern celebrates all of Oregon’s athletic endeavors, from the Timbers to the OSU Beavers to the Trail Blazers and more, and fans of all stripes congregate here to cheer for their favorite teams on the several large screens over the bar.

“Joey really wants this to be a complete celebration of Oregon athletics,” Magarian says of the tavern’s incredibly extensive and eclectic memorabilia collection that Harrington curated. “We hope our customers will become immersed in our passion for the Oregon sports.”

For Magarian, it’s all about the guest experience. “When they leave this place, I don’t need them to say, that was the best food, that was the best place to watch a game,” he says. “I just hope they say it was the best experience they’ve had in months because it was so balanced in what it delivers. That’s my goal. And I think we’re getting closer and closer to it.” —Kathleen Bauer | Photos by Paul Wagtouicz.