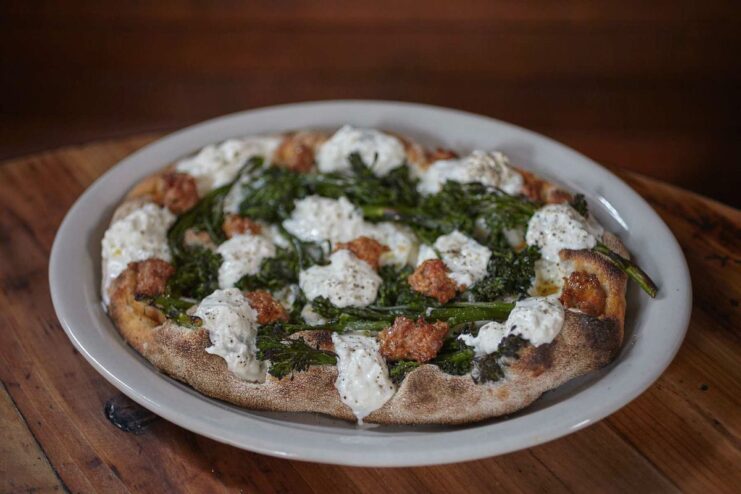 Montesacro is the name of a neighborhood of Rome, a hardscrabble working-class quarter, like many others affected by the aftermath of the Second World War. Our goal is to pay homage to those days and to the people who lived throughout that tumultuous time. We take inspiration from the classic “fraschette” of the Lazio region and offer “pinsa”, a modern take on the ancient flatbread once prepared by peasants living outside the imperial walls of the Roman Empire.

Over time the fraschetta concept evolved to include some typical foods of the Lazio region – offering cured meats, local cheeses and small stuzzichini like olives, pickles, and sott’oli {olive oil cured vegetables}. Among all the local specialties, a particularly widespread was represented by roasted pork also known as porchetta.

The word ‘pizza’ most likely derives from ‘pinsa’

Pinsa in its ancient Roman origin was first described by Virgil in the Aeneid as being made with spelt and used as a “plate” to serve meat cooked in a hearty sauce – frugally topped with vegetables, meat bits or fruit. The Romans used mainly farro (spelt) which was then known as “far”. It is reasonable to believe that it gave the name to our modern word “farina” (flour).

Today you can enjoy a taste of this ancient tradition at Montesacro, the first stateside pinseria offering a modern take on pinsa made with a blend of rice, soy and wheat flour imported directly from Rome, all GMO-free. It is low-fat, low-calorie and easy to digest. Part of the elaborated processing technique is the minimum 72-hours leavening process at a controlled temperature, hydration of 80% (fewer calories) and the low content of olive oil (less fat), unlike traditional pizza will not complete its leavening during the digestive process.
Business Details