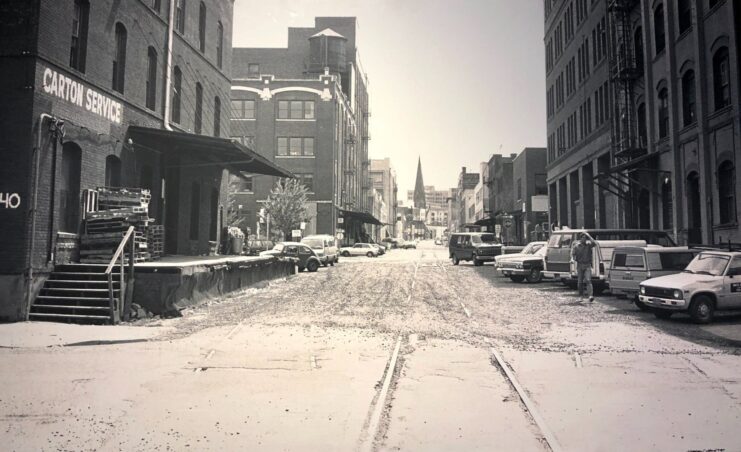 The name of Portland’s best known art district, The Pearl, suggests urban legend. Perhaps an oyster canning factory once sat amidst the aging warehouses, or Chinese seafarers hid pearls beneath cobble stoned Twelfth Street. Whatever the origin, there’s the suggestion of both beauty and ugliness in the name—an elegant gem nestled in a drab, rough shell.
The story goes like this: Thomas Augustine, a local gallery owner, coined the phrase more than 10 years ago to suggest that the buildings in the warehouse district were like crusty oysters, and that the galleries and artists’ lofts within were like pearls. “There were very few visible changes in the area,” says Al Solhiem, a developer who has been involved in many projects in the district. “People would drive by and not have a clue as to what was inside.” As local business people were looking to label the growing area—the “warehouse district” or the “brewery district” were two suggestions—an Alaska Airlines writer borrowed Augustine’s phrase, according to Solheim. The name stuck.
“Everyone hated it,” says Pulliam Deffenbaugh Gallery owner Rod Pulliam, who opened his gallery 10 years ago. Few other galleries, such as Quartersaw and Blackfish, have histories that go back that far. But many artists lived or worked in the area in loft buildings such as the Maddox on Hoyt Street. Back then, says Pulliam, light industry, vacant buildings, and blue collar cafes outnumbered the galleries and lofts.
Despite initial cynicism about the name, few deny that it’s catchy. The Portland Institute for Contemporary Art (PICA)’s inventive announcement for its 1998 annual Dada Ball included a tuna can with a fake pearl inside.